The Lock, Wolverley by DavidEMore at Garmin Connect - Details
Posted by Lassie at 14:15 No comments:

Trail: One of the co-founders of the WFH3 is 50! Many happy returns Compost! Hashers, hashlings and hash hounds (almost one for each of his 50 years) congregated on the car park of the Waggon & Horses in their garden-themed fancy dress for the celebratory après-hash Cava. Some wonderful costumes to behold and some new faces on the scene too – hopefully not just for one night only. And here’s hoping that tonight’s sunshine will continue…

Lots of excitement from everyone, particularly the poorly green garden fairy, who thought she might not even finish the hash. Wearing her fancy pyjamas (just in case she needed a lie down, I guess) and armed with throat sweets she bravely croaked her way around the car park, waving her windmill.

Cross Dresser finally gained control of the crowd to start the chorus of “Happy birthday to you…” Compost was given his birthday present: a new horn and then we were enlightened with tonight’s rules: “3 flat miles” – ahem, this is Bewdley! 5 hash halts tho so it’s not all bad. We were then pointed in the right direction and off we set.

Down towards Bewdley and much confusion as not a lot of flour or sawdust in sight, luckily Compost came cycling past giving us extra directions. Cutting up behind the Great Western, down Station Road and back towards the town with the first HH at the Black Boy Hotel. Plays with IT was caught lighting up but a round of the down downs song and happy birthday cheers to wash down the first round of beers put everyone else off the scent. A couple of beers in and there was a lot of “flop-a-lop-a-lop-a-lop” from Clodhopper!

Across the main road and down into Pewterer’s Alley, back down onto Stourport Road, across the bridge and along Severnside South. An impromptu photo stop at Gardener’s Meadow before heading up towards the 2nd HH at the Cricket Club with more sweets and beers and introductions to the newbie’s (or oldies) Bodyguard & Mike (who can’t remember if he ever had a hash name).

A couple of snifters for our little green fairy meant she was starting to turn mischievous and getting more animated by the minute! She flew up the next hill as we headed up away from the cricket club and accosted Well Laid, who’s overalls were causing a bit of a scene but also as she had somehow made it as an FWB!

Racing on to the next HH at the Black Boy pub for more beers (& the refusal of water), the Pro got caught stealing the local rag and Say No More’s number wasn’t yet up but her crowning glory was subtly noted.

Through Hales Park and over to the Hop Pole for Pimms cocktail this time – my, he is spoiling us! The little green fairly was now slurring her words, losing her balance & being propped up by Shag. Meanwhile, the Pro was slugging from the jug in the most unladylike manner! (How very refreshing) A beautiful view over Bewdley, although another storm was now threatening…

A picturesque descent through the cobbled lanes, down to Welch Gate and down again to Severnside North, where Ellie was waiting for us with her birthday banner & a wee tipple of Port – hic! The Pro still had hold of her newspaper, Captain Caveman was contemplating “a dip in the stream,” then the rest of the crew caught up to enjoy the celebrations and a second round of birthday photos.

The final leg back to the on inn saw hashling Lost Skywalker racing ahead of Cross Dresser and the birthday boy somehow proficiently cycling back to continue the celebrations. Many happy returns Compost!

Down downs: awarded by a very merry jolly green fairy to Compost for his amazing birthday hash; the new boy (?!), Michael & the Bodyguard, Ellie for her refreshments, Well Laid for her Mrs Overall impersonation, for being an FWB & for falling; Penelope Pitstop for her birthday pole dance; then to the heats for the fancy dress competition: will it go to Say No More for her delicate daisy chain crown? Will it go to Copulation for his simple, yet effective, tribute to the birthday boy with his compost bag & plant pot helmet? Alas, no, the winner is Cyclopath for her family effort of the garden shed, garden fence and garden pond –well done!

P.S. Post-hash shenanigans saw Doggy Fashion stumble off into a hedge as Cross Dresser and Shag had to move Cleopatra’s car in order for Copulation to be dunked head first into a drain to retrieve her car keys – down downs to be carried over to next week methinks!
Next week: The Lock, Wolverley (family friendly half term hash)
Posted by Lassie at 08:10 No comments: 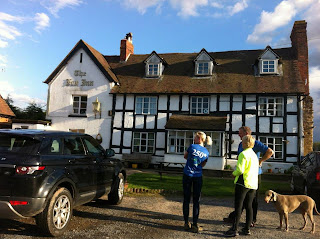 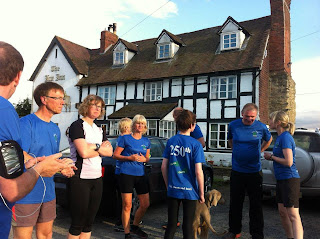 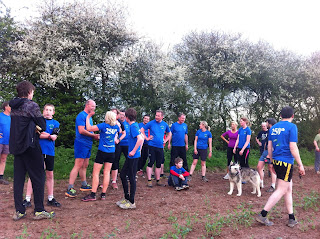 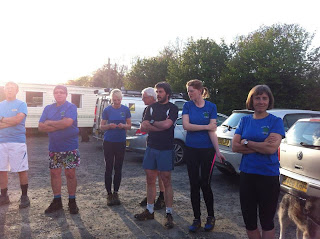 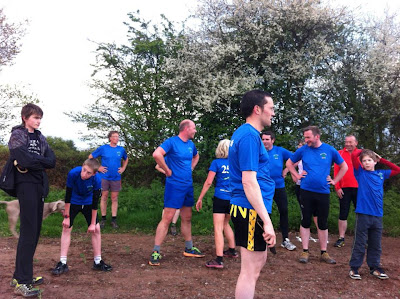 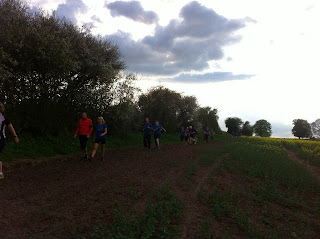 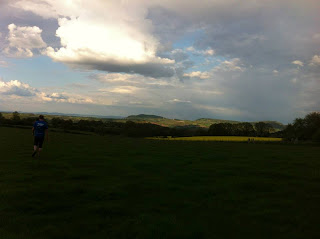 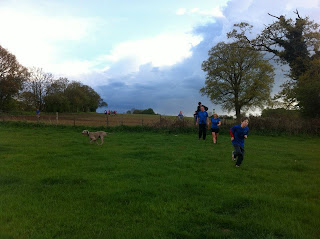 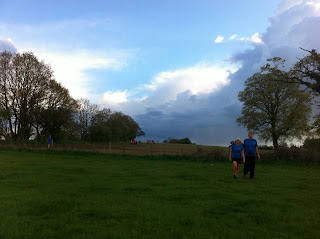 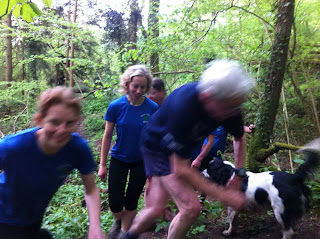 Next week: The Waggon & Horses, Bewdley
Gardening fancy dress to celebrate Compost’s 50th birthday
Posted by Lassie at 08:41 No comments:

Trail: A beautiful, picturesque trail around Menith Wood and Great Witley, with the bluebells in bloom and even a little sunshine to light the way. Lots of ups and downs, lots of luscious terrain, lots of attention paid to Annie by the other canines, lots of jostling by young Torchy (yet again!) and of course, lots of fun.

Get Down Shep approached the first HH heavily laden down by his paratrooper—style rucksack and we almost wondered why he was carrying it until we were treated to some rather special sweet and tangy worms. Golden Shower was found crouching alongside a Beetle but wasn’t checking his makeup; instead he required the delicate extraction of an insect from under his eyelid.

The rucksack was proving to be too much for our trooper and off he went short-cutting whilst the rest of us climbed the next hill and then went galloping off down through the fields with a cheeky sharp left-hand hairpin bend and yet another ascent to the next HH. Some hashers got a little too excited about the beers – maybe Slippery Nipples might have been more appropriate?

A herd of manic sheep throwing themselves at a wire fence got Shag and his Demon Dog with our RA but she soon forgot this episode and started recounting how she was enjoying her new musical purchases, her Mystic Meg prowess and how she’d got her large jugs out in the school canteen.

Hash Quack nearly got herself in a spot of bother as it appeared that she was losing her own trail but the apple loops saved her at the 3rd HH and they were soon proclaimed to be the confectionery equivalent of panache!

Down downs: Doggy Fashion awarded down downs to Hash Quack and Get Down Shep for their wonderful hash, their wonderful hospitality and their re-routing of food money towards Early Riser’s charity run. There had been a lot of whingeing on facebook about this one, given Hash Quack’s previous history, but this hash was just lovely. Some beautiful scenery plus we were home before dark. We did see some changes in the weather along the way but all in all, it was a great one! Early Riser for his spectacular fall over a twig, right in front of Doggy Fashion so there was no way of escaping that one, and for his 10K run for charity at the weekend; Torchy the Battery Boy for his 50 mile bike ride on BH Monday plus him trying to jostle the RA along the way tonight; Captain Cavemen for short-cutting over a stile as the farmer observed this trespassing manoeuvre; Trenchfoot for surprising us all just after the 2nd HH then racing off ahead leaving those behind to wonder who on earth had joined us; Copulation for his Julie Andrews tribute to the wonderful countryside; and finally, to Leg Over, who didn’t get his leg over anything this evening as he was still nursing his poorly feet – all together now – aaaaaaaaaaah!

Hot Lips x
Next week: The Fox Inn, Hanley Child
Posted by Lassie at 15:50 No comments: