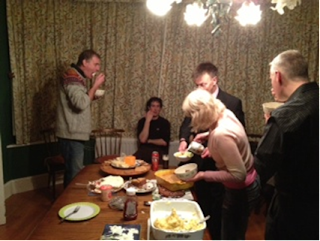 Trail: So… no GM… no Hash Horn… no Hash Flash… no Berto… how could there possibly be a hash with so many off sick with the lurgy???  I was running late myself and feeling slightly bad that there might be just a handful of people waiting for me but alas, an incredible 20 or so hashers were gathered at Brookfield House!  A few fumbled (and failed) attempts to try & locate my torch and then we were off for a zig-zagging 5 miler around Kidderminster.  Starting off with a bit of tarmac and some wonderful Christmas lights down onto Marlpool and then some lovely mud and puddles on Puxton Marsh, not to mention the hare with his devilish tactics.  Back onto the estate, up towards the rugby club, up Marlpool Lane, across the Franche Road, down past the school with it’s  and over onto White Wickets.  Back around and onto Wilton Avenue with cries of “get to the sweets before Darth Radar!” we were too late tho, he was already at the HH and standing suspiciously close to a “pavement pizza.”  A little lesson in astronomy from Golden Shower and then the cheeky girls took a wrong turn up the alley but carried on on anyway (trying to confuse the hare).  Back over onto Ferndale and into the cornfields, where Clodhopper was determined to continue with his cruelty theme taking us the very long way home back to the on inn.  A refreshing dip in the pool for a few of us before indulging in the home cooked dinner (thanks to Hopscotch & folks).  A great hash, a great swim, great food and most of all, great company!  The after-dinner whip round was donated to Kemp Hospice.

Down downs: awarded by Doggy Fashion to Clodhopper for his hash that went on and on; Hopscotch (and folks) for their wonderful hospitality; Darth Radar for his Hash Heckling (…a new role maybe?) plus his forthcoming birthday this weekend – many happy hashing returns! To our visitor, Sybil for his 1st Wyre Forest H3 hash plus his introduction to Tangfastics – addicted already! To Doug for his after show appearance and reassurance that he IS invited to join us next time; Lassie for landing himself right in the smelly stuff (it still didn’t put him off his food!) and finally to Jade, Legover’s daughter, who only came because she wanted a sausage!

Family Hash Saturday 5th January at 11am, Gardener’s Meadow car park, Bewdley,  in conjunction with the Wassail with Wyre and Wychwod event 2-4pm

There are still places available on the Malvern Hash weekend – see Say No More or Bristols for more info
Posted by Lassie at 16:06 No comments:

Trail: it would have been easy to duck out of tonight’s hash with yet more rain and flood warnings but we’re hashers and we’re true so about 20 of us gathered for tonight’s watery trail. It didn’t really matter that only 2 thirds of it had been laid as most of the flour had been washed away anyway. And so, off we set, up to the top of Wyre Hill, through the estate, through some extremely slippery, wet and muddy fields (wellies would have been more appropriate footwear) and down to the first HH near the Hop Pole where Hard On’s Xmas prezzies caused a bit of a stir! On down through the woods to the next HH where a temper started to fray but Shag just about rescued the situation with his wise and witty words. Down and along Severnside North, where the river joined us on the path, threatening to take some prisoners. We all managed to escape into the caravan park and up to the 3rd HH at Crossdresser’s mum’s house where we were treated to some warming mulled wine - lovely. Soaked to the skin, we headed back to the on inn, only to be put into the dark room for supper. Saved by beer, sausages & chip butties and a very special gift from Santa!

Down downs: awarded by Doggy Fashion to Crossdresser for his “half a hash;” Shag for his Santa Special presents for Hard On; Hard On for being the most offended hasher; and to Cleopatra for encountering some repeating after her sucking. 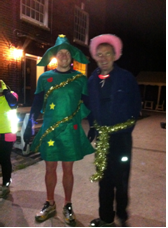 Trail: Wow! An excellent turn out for tonight’s Christmas lights hash.  A sparkly Christmas fairy, a twinkling Christmas tree and plenty more Christmas lights, tinsel and a few baubles set off down the river, with a little confusion at the start, causing us all to run around in circles before picking up the right trail.   Once we got going, the beautifully illuminated trail of hashers was really a sight to behold on this cold & frosty evening.  We thought we may have lost a couple at the first HH (at least we still had the virgins) but maybe there’d been a miscalculation at the start…?  Oh well, back down the river, to the marina and out onto Sandy Lane where a few thought they’d try to see how many hashers they could get into a phone box (they’re crazy and they know it).  Across onto Hartlebury Common, where the sandy, hilly terrain ensured we knew who’s trail this was!  Back down past the old power station and to the on inn for the best meal of the year!  Merry Christmas all!!

Down downs: Hash Quack for being the live hare and keeping this chilly run to a reasonable distance (it MUST be Christmas!); Virgins: Claire & Gary (for not getting lost); Lassie for his dessert contribution; Tits or Treats for her new floss and also for only realising this was a live trail on the way back; Hard On for his new boxers; Sponge Bob for the best fancy dress (Christmas Pirate!); Chase the Rainbow for his admission of his hatred for sprouts and tonight’s rustling in the leaves, earning him the new festive name “Russell Sprouts!”
Hot Lips x 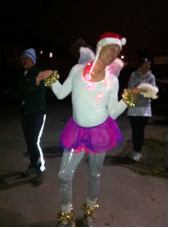 Next week: Black Boy Wyre Hill, Bewdley (no dressing up)
Posted by Lassie at 18:09 No comments:

Trail: This pub has the steepest, smallest car park meaning parking was a feat in itself! But despite this and the rainy conditions (again), about 20 or so hashers and a few of the usual canines dressed to impress in their red dresses and tinsel boas.  Starting off with the steep uphill climb behind the pub and into town to dazzle along with the Xmas lights (& causing lots of tooting).  More checks than spots caused a little confusion at times but we somehow managed to stay together, getting to the 1st HH down at the riverside park.  Too much rain to hang around, so lip gloss was reapplied and we were off again, up the steps onto the bridge and down towards Areley Kings, where we were treated to Bucks fizz and beer at the 2nd HH.  Heading back towards the Dunley road, crossing over and onto the Walshes estate, where anything could happen… and it did…  A marked police car singled Copulation out and kerb-crawled him, finally pulling him (over).  Was it the backless dress?  Was it the amount of flesh on show on this cold, cold night? Or was it just a case of WTFs going on?  And so, let off on a caution (heels rather than flats, obviously) he rejoined the rest of us to make our way, rather uneventfully, around the rest of the estate.  Another 2 HHs with plenty more sweets, then back down along the river, crossing the one and only bridge in Stourport (honest gov), past the funfair and back to the on inn.

Down downs: awarded, rather appropriately, by Crossdresser (tonight’s stand in RA) to the hares for their great hash, almost only laid in checks and their domestic regarding the bridge over the river Severn; honourable mentions on the dressing up to Hard On (irresistible?) and Wrong who caused a bit of a stir back at the on inn but down downs for Slim boy Fat who’s outfit resulted in a bit of moob chafing and Copulation who’s saucy outfit resulted in being pulled (over) by a copper! Namings: Phil, now known as The Fiddler, for telling people he’s in a job where he plays with it… oh, IT! And James, who ate almost his own bodyweight in skittles, resulting in him being named Chase the Rainbow.  More down downs for Game Bird for NOT getting engaged but being a homewrecker (?); Legover for his Saturday night out 2nd only date – he’s not called Legover for nothing y’know! Eamon for his 1st ever hash when he’s not driving so he’s drinking (and he;s desperate) and finally (because there was one left over) for Lassie for turning up in his uniform…

Next week: The Angel, Stourport (food order to Lassie via link on website asap)
This Saturday: Bikini & Bermudas party at Brookfield House, 7.30pm (children welcome)
Posted by Lassie at 10:31 No comments:

Trail: Some on-road stretches, but mainly a combination of frozen or muddy ground set with flour – just under four miles long. Fears that the bitterly cold weather might deter even the hardiest of hashers from taking on Game Bird’s challenge were soon dispelled with the turn-out of some 20 at the RV.

And talking of game, it looked as if a wild animal had escaped from the nearby West Midland Safari Park until closer inspection revealed the unmistakeable figure of Wrong fetchingly attired in a swanky Tigger costume. “It’ll keep me warm,” Wrong assured us. More about his “chaffing” later.

Equally fetching was the sight of Annie the Labrador adorned in a luminous yellow tummy warmer plus collar with red flashing lights. Just the job to avoid collisions with black, unlit doggies in the dark.

Off we cantered in search of the first blob of flour, grateful for an initial run of tarmac to get into our stride and warm up our freezing frames.  Three hash halts and plenty of squelchy mud later, we were climbing back up towards the Cleobury high street and a quick change in the Talbot car park before heading on to the welcome warmth of Game Bird’s Mum’s abode.

“Mum” had put on a selection of three steamingly delicious soups – chicken, carrot and leek & potato – with a choice of cheesecake and home-made fruit crumble to follow.  Most had both!  To the hungry hashers, it all went down a treat – a fitting occasion to celebrate the birthday of Dr Whiplash, who made short work of blowing out his candles on the cheesecake.

The only complaint came from “Tigger” Wrong, about the chaffing from the clinging cat-suit still stubbornly affixed to his body.  Offers to inspect the affected anatomy were politely declined!  No complaints, commendably, from a sporting Declan when a couple of pranksters (briefly) hid his fish-and-chips while he was fetching drinks.

Many thanks to Game Bird for guiding us in from the cold so expertly with her flour trail. And not least a big thank you to her Mum for warming us up with the perfect meal.

Down downs were awarded by to the Hares for an excellent hash, and to Tiigger, I mean wrong for his chaffing or was it his outfit. Finally to Hard on for selling on his red dress to Legover  with no hint of embarrassment, ready for next weeks hash!

Get Down Shep        Guest blogger
Next week: The Steps on Gilgal, Stourport Red dress and tinsle boa hash
Posted by Lassie at 14:09 No comments: