The 3 buccaneers: Blackbeard, Captain Jack Sparrow & Georgette “Cutlass Rattler” Blamey, plus Long John Skywalker & Lassie “Calico Jack” dressed up for the occasion o’ setting tonight’s hash asail. The rest o’ the landlubbers had missed this verrrry imporrrrtant inforrrrmation an’ looked verrrrry confused to say the least. Let’s see who sails an’ who gets tossed overboard shall we…?

A perrrrfect trail from Captain “Kidd” Clodhopperrrr this evening, set in wood-based derrrrrivatives an’ mostly off road, as we like it. Lots of checking out, lots of falsies an’ lots of sawdust (for a change). Heading down from the Sun, through Romsley, before cutting off into the countryside for some jolly japes.

Swashbucklers Copulation, Lassie “Calico Jack” an’ the Amateur nearly always out front but Clodhopperrrr had some tricks up his sleeve to slow ‘em down. Groans from the masses as we took the trail into the woods, only to find ourselves looping back out into the fields again – arrrgh!

Lots of talk about sex and exploding corpses from buccaneers Shag and Doggy Fashion, both of whom, it seems, can make a story out o’ just about anything. There was a beautiful low harvest moon, with some perrrrrfect photo oporrrrtunities – luckily not all of them ended up on my phone.

There were 3 Hash Halts, with rationed loot at each one (apart from the smuggled delights at the final HH). Blackbeard tried to get us to walk the plank at any given opportunity, whilst the old sea dog Wrong was happy to jump in the water to disguise the fact he needed to relieve himself. He got so desperate he was finally discovered in an uncompromising position.

The final leg saw about half a dozen FRBs going the wrong way. Were they called back? Oh no, let them run. Ha harrrr! Men over board! Arrrr! The uphill back to the on inn saw swashbuckling hashling Long John Skywalker rob Captain Jack Sparrow o’ his prize o’ getting back to the battle cruiser first – get in therrrrrrre me lad!

Grog grog: given by DF to Clodhopper for being the best hare everrrr; Wrong for tuning into his pirate radio station; Hot Lips for being the best dressed pirate who made no secret of smuggling her gems; Game Bird for the aftermath of last week’s hash by Bubbles and finally to Cinderella for losing one of her garrrments.


The Sun at Romsley Hash by Lassie  Details

Met at Kinver Edge Farm Shop, after at the Constitution Club, Kinver

#271Date: Thursday 12th SeptemberVenue: meet at Kinver Edge Farm Shop, after at the Constitution Club, KinverFood: off the menuBeers: The biggest collection I’ve ever seen: Holy Cow, Bonkers Conkers, Golden Glow, Hobson’s Best, Town Crier, Enville Ginger, Hereford Pale, Cleric’s Cure, Holden’s Special, Black Pear, Enville Ale. Ciders: Stowford Press, Westons Wyld WoodHares: Game Bird & Bubbles, although Bubbles copped out of actually running the route Visitors: Shirley & the Duracell BunnyVirgins: noneTrail: Loads of hashers (about 30) this drizzly evening, only a couple of hashlings and one wammal (Maisie, who only made a guest appearance at the start) and plenty of shorts and knee-length socks – well done everyone! And so the joker briefed us: “it’s laid in wood-based derivatives on the left side of the path… until you see them on the right side of the path… then there’s lots of down… then there’s lots of up…” Oh please, let’s just get on with it shall we?Off we set, some up the lane, others down the lane, some of us got it right and everyone else followed until we reached the first check… Which way should we go? No one knows, maybe the hare will know? Oh, no, she doesn’t? Oh well, let’s just make it up then shall we? The usual suspects were out at the front, checking out the possibilities, Hash Quack going one way, the Amateur going the other, the rest of us already chancing an opportunity to head straight back to the pub.Oh yes, it’s this way, she remembered, so off we went, still none the wiser as no “wood based derivatives” had been seen yet anyway. The next check caused just as much confusion and we spent 10 minutes running up and down various routes – yes, this is it, no, there’s nothing, yes this is it, no, there’s a cross, actually this is it! The hare was out at the front, desperately trying to remember her way around, yet it seemed that her co-hare had set her up to fail and was probably sitting in a warm cosy pub somewhere laughing to himself.The HHs were stumbled upon in no particular order. Occasional hashers claimed to have found the trail, however, we still looked like a disorganised search party. Poor Game Bird spent as much time checking out the route as we did and was noticeably delighted when she found her own trail, flailing her arms around in the air and whooping along!And so, despite the rain & the total chaos, we somehow made it back to the cars for just after 8. Was it Quantum physics? Quantum mechanics? Or was it just that we Quant be bothered anymore? Your guess is as good as mine…Meanwhile back at the Constitution Club, Bubbles was hardly recognizable as he sat at the bar, looking like a cross between some 60s glam rock star and Paul Weller, buying everybody drinks!Down downs: Game Bird and Bubbles for the worst hash ever, a lack of drinks and Bubbles being the birthday boy in a wig; Shirley (Dr Jeckyll’s wife); the Duracell Bunny for his new shoes, Cleopatra – comin’ at ya; and a naming for Sue: Hairy Bush.Hot Lips xNext week: The Sun, Romsley, B62 0LA
Posted by Lassie at 15:24 No comments: 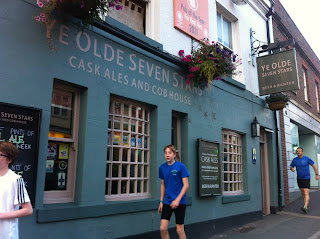 Trail: It started out as total and utter chaos, with 17 hashers and half a dozen hashlings, all very excitable and distracted right from the start. The GM found it difficult to lay down any sort of law and order and swiftly sent them off to check it out, which they did, all of them in the wrong direction! This gave the 3 musketeers another chance for yet another dodgy selfie as they stood for what seemed like an age, waiting for the hashers to return.

And so, finally on the right track, the flock headed up Blackwell Street and towards the Horsefair. Not much checking out at the start and they mostly moved as a collective this evening, much to their detriment as they would later find out. Lassie being one of the few to branch out on his own, only to find himself high and dry on the ring road. The 3 musketeers sauntered behind.

Through St George’s park, Shag looking very pleased with himself for noticing the landmark miniature stone circle. Cutting up towards St George’s church, where the flock went off in search of imaginary flour, led by young Lost Skywalker. Another chance for the 3 musketeers to have a little chat before calling them back, although the RA was not amused by the use of hand signals. 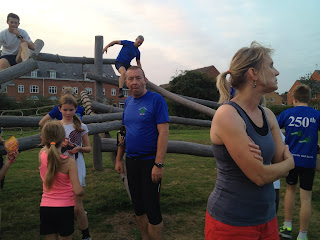 Trenchfoot, Copulation & Hash Quack ventured out on their own for a while as there were more checks than you could shake a stick at (much to the disgust of 2 of the musketeers). A few more of the flock went running off a little too far and had to be reigned in, before they all found their way into Baxter Gardens.

Copulation headed off for a game of tennis and had to be called back across the park and up to Hurcott Road. The 3 musketeers waited patiently whilst Lost Skywalker led the flock in the wrong direction yet again (there’s a clue in his name!) Trenchfoot, Shag and Doggy Fashion had the upper hand for a while as they had realised the aim of the game – to follow the spots of flour, not the youngest hashling who claimed he knew where he was going.

And so, back down into the Horsefair, where we were hoping to meet Legover, who was arriving fashionably late. Whiplash was left hanging around on the street corner whilst the rest of us descended down towards Waterside Grange. The flock was herded over to the climbing frame for the first HH and all were rewarded with sweet treats regardless. Another wonderful photo opportunity for Cross Dresser, before checking out the next part of the route.

Legover, the latecomer, was found to be encouraging walking amongst the hashers and was swiftly reprimanded. Most of the flock actually took the correct route for once, looping around the houses and down onto the canal, with Lost Skywalker the FRB, whilst Shag and Doggy Fashion shortcutted to meet them (the 3 musketeers obviously took that route for more photo shooting of course).

Game Bird became more like Mary Poppins or Nanny McPhee, attending to and encouraging the hashlings along this straight stretch of tow-path. All were treated to a “Hash View” of the winged sculptures across the water but this was the calm before the storm: a very sneaky check back took the hashers half a mile upstream before having to return to the lock to pick up the right trail. I think it was lucky that none of the musketeers were pushed into the canal at this point!

More aimless following of non-trails, no-one really paying any attention to where the hares were heading, despite calls of “are you?” until Trenchfoot finally stumbled over some flour. The hashlings had again talked Shag into piggy-back rides. The RA, not to be outdone, got herself her own ride down the field too although her tight-gripping thighs were almost too much to bear. Plays with IT and Russell Sprout lit up the undergrowth with their premature beams and Copulation was spotted by one of his own – evening all.

A mad dash across the open field, a swing on the high bars for Copulation and an unexpected dip in the stream for Hot Lips was followed by beers and more sweets. The RA apparently needed cooling down after her ride and was treated to a dip too. The waterproof phone cover really does what it says – excellent! 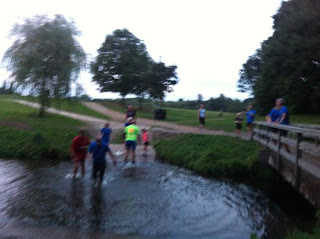 Cleopatra was pointed in the right direction as the trail double-backed over itself but still managed to not quite get it right. The rest of the hash had to be called back yet again, as these twists and turns left them exasperated and untrusting. Up towards Sion Hill, then cutting back down through Springfield Park and along the path out to Broadwaters.

The hashlings were now trying to talk Legover into piggy-back rides up the hill but they met with some resistance. They regained their energy at the final HH as they found the trampoline whilst Pimms cocktail was served to the adults. Hot Lips changed out of her wet t-shirt and Doggy Fashion nicked Trenchfoot’s newly acquired top.

More chaos and hand signals to help the hashers wind through the alleyways onto the Birmingham Road and the long straight to the on inn. Lost Skywalker kept the pace way out front with Hash Quack, whilst Game Bird’s childminding skills had by now gone a bit awry and she was losing hashlings all over the place. Despite the chaos, everyone returned safely to enjoy a lovely feast. 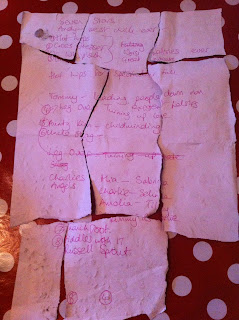 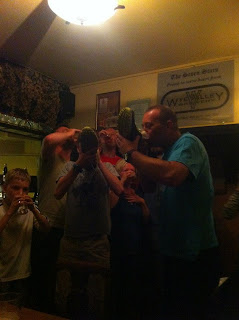 Down downs: the longest list ever awarded by Doggy Fashion to the 3 musketeers: Cross Dresser, Dr Whiplash and Hot Lips for their chaotic hash with the worst falsies ever but some great sweets (plus Hot Lips’s spectacular slip into the stream); Lost Skywalker for his ability to led everyone astray at any given opportunity; Legover the disruptive latecomer; Game Bird for her childminding; Shag for his piggy backs; Trenchfoot for his welcome return (also for letting DF wear his brand new hash t-shirt); Plays with IT and Russell Sprout for glowing in the dusk and finally to Charlie’s Angels: Sabrina (Mia), Selina (Charlie) and Tilly (Amelie).


The Olde Seven Stars Hash by Lassie Garmin Connect - Details
Posted by Lassie at 08:38 No comments: