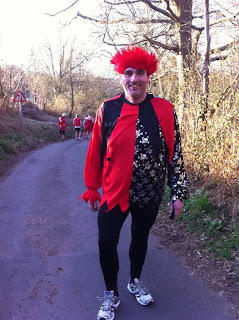 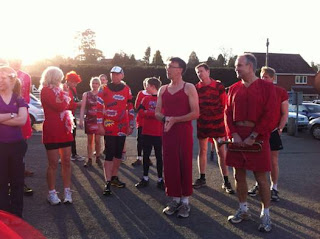 Trail: 30 hashers congregated in their finest red frocks for tonight’s celebratory WFH3 250th hash.  Captain Kremmen told us about the original Lady in Red, who sadly died last week.  He paid a fitting tribute as he told us about the history of the red dress hash.  A show of hands for tea & then there was no stopping us.  A dry trail this evening, lacking in flour, blamed on the gale force winds of the previous night but who needs flour when one of the hare’s an FRB?
Up out of the car park and onto the Compa, then back down to the high street and across the playing fields, turning a few heads and rendering some footballers speechless.  No sweets at the first HH but a game of human BMX kept us entertained – Wet Wipe was quickest but wasn’t wearing a dress so was surely disqualified?  Wrong was posing for pics but feeling a little shy so treated us to Cross Dresser’s lucky pants instead.
Off through the woods, through some of Kinver’s country lanes and a scenic route along to the canal.  Bristols was missing her Golden Shower at the next HH but his wammel got more of a welcome once he finally caught up.  Cyclopath faithfully said she preferred the Amateur’s horn, which put an extra spring in his step, particularly as he’d also seen a rare spot of flour.
Bubbles then started to show his competitive nature, leading Copulation, Leg Over and a few more of us down a long falsie – we called him another name beginning with B for this.  We should have listened to our instincts, we knew we had to cross the next bridge.  Some more canal tow-path running and some lovely old cottages to view along the way.
Now there might have been a lack of sweets at the previous HH’s but the finale made up for it all – Panache, flasks of tea, plates of sweets, homemade bunting, a smiling hostess and some groovy tunes – it was like being back at the school disco!  Cheers to our 250th hash.  Whizzo!
And so, with spirits raised, we set off to complete the final leg.  Bubbles, still the ever-competitive FRB, was first back to the on inn (hasn’t anyone told him that this is a non-competitive sport?)  Cross Dresser’s makeup was still firmly in place begging the question “where did you get that lip gloss?” I want some! 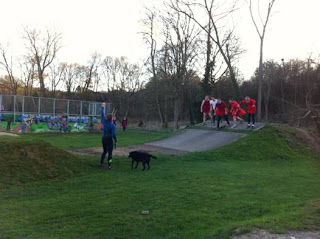 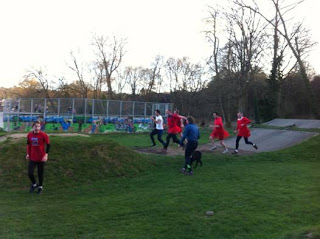 Down downs: Game Bird & Bubbles for their great hash and for Bubbles being the winning hare; Well Laid for locking her keys in her car; Wet Wipe for complaining about the lack of totty; Tits or Treats for her strangely silent return; and finally to Captain Kremmen, Slim Boy Fat and Lassie for their truly inspiring costumes!

Our route, Check it out!!