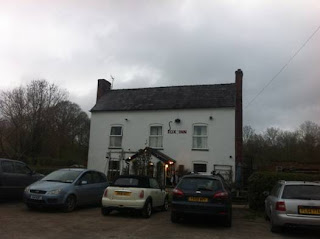 Trail: A lovely 5 miler, mostly off road this evening, around the Monkwood Green nature reserve, with a bag of flour supposedly used for each mile(?!)   This was certainly the safari hash, with more wammals than you could shake a stick at: the nesting swan and her angry mate, the sheep, the ducks and geese, the sheep, the cattle, the horses and yet more sheep.
Fiddler and Sprout could probably be forgiven as the trail had most likely been eaten by said wammals, however, Sprout kept forgetting the route and leading us down unintended falsies, much to his amusement.  He had to show us the first 2 hash halts too as the flour was practically non-existent but we soon forgot those minor details once the sweets were opened.
Previous warnings to take our maps went unheeded as we thought that the hares might actually have a clue.  How wrong we were!  The angry farmer confirmed this too… (if only we had a Lost in the hash – tee hee!)  After running rings around him (he’ll only suffer chafing in that boiler suit) we set off into another field to bother some more sheep.
And so, more styles, a strange boggy field that had Sprout roaring with laughter again, an electric fence giving Game Bird a thrilling time but leaving Cross Dresser caught in the cross fire, more wammals (including a few lively horses) and a final HH with Panache.  …did I mention wammals?
Luckily, no one was lost.  We all made it back to one of the best on inns, if not THE best, for some homemade hearty soup & bread and the piece de resistance – the after dinner mints.  We don’t want to go home!

Down downs: awarded by Doggy Fashion (who was very impressed with the pub, it’s food & the after dinner mints) to The Fiddler and Russell Sprout for their controversial hash with live falsies and angry farmers advocating the use of maps (he did warn us!); Visitor Baboushka, Say No More for her hedgerow impression comparing the meerkat, Penelope Pitstop for getting herself caught in the gents; Game Bird for her shocks and thrills; and finally to  our virgin, Just Olivia, who was caught with handprints on her rear, resulting in a naming - Well Spanked. 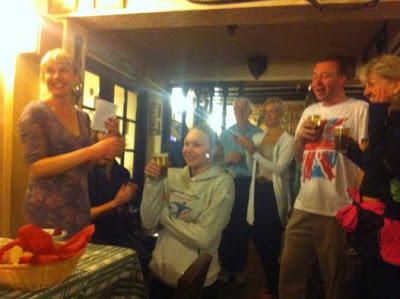 T-shirts – the first batch got an outing this evening and we were all very impressed!  If you would like one, let me know your size & I’ll order, H x