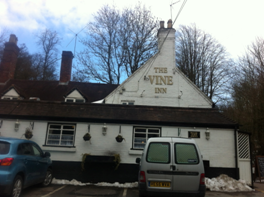 Food: posh nosh off the menu
Beer: Thwaites
Hares: Tweeny, Penelope Pitstop, Pot Belly and another BH3 hasher
Hashers: An egg-cellent turn out for this Easter hash, about a dozen from WFH3 and other hashers from Birmingham, Malvern, Leamington Spa, Milton Keynes, even one from Belgium, plus the rowdiest rabble of dogs you’ve ever heard – oh joy! 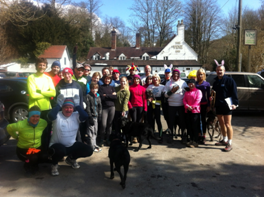 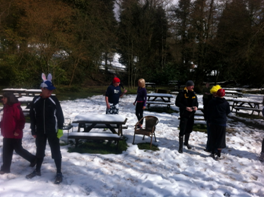 Starter: the Easter bunny had been busy in the Vine’s garden so our first stop was to find the 30 creme eggs hidden in the snow.  Hopscotch and I swiftly found ours on the patio and savoured them smugly whilst we watched everyone else manically searching for theirs, whilst also dodging the snowballs.  Darth Radar quickly found himself half a dozen and had them bagged up (a real chip off the old block).  Chaos in the car park, an almost squished dog (lucky escape), hashers not paying attention, lots of colourful hats and wigs, the mutterings about hash cash but that was all about to be forgotten as we were off... 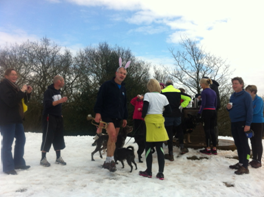 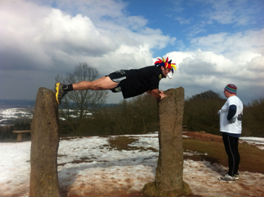 Trail:  A wonderfully hilly, snowy and sunny trail, starting up out of the garden (for those who were listening) and a false sense of security as the trail was incredibly (not to mention indelibly) well marked at the start, with a separate path for runners and walkers – how very impressive.  Lost Boy was true to his name – apparently there are only 2 pubs called the Vine south of Manchester and he managed to find the other one.

A few falsies early on in the trail, some shortcutting up to the top, a lovely view too but we weren’t stopping, on-on to a downhill, only to be caught out by missing the cheeky loop around the trees.  Tweeny kept up the momentum and motivation with his Cleese-esque calls and elaborate horn-blowing.

Back up to the proper summit and some welcome Gluvein to warm us at the HH.  Some spectacular press-ups across the stones from one of the BH3 boys but an equally impressive tribute to this Easter weekend from young Darth Vader.  A great photo opportunity and we were on-on again, starting off with a black run down to the path where Easily Led was nearly easily pushed (!) the luscious, deep snow preventing any falling.

Some more beautiful, gently declining snow-running down to the second HH at the Hill Tavern, where Game Bird was up for it and got her legs over Leg Over – this wife-carrying lark really is taking off!  A swift half downed, some blue hash markings missed and we were off for another uphill before heading back down again to the on inn. 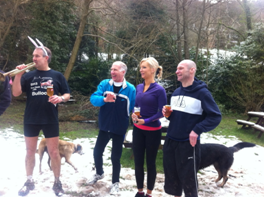 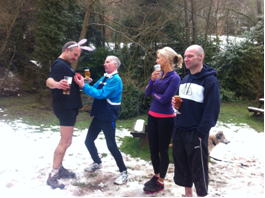 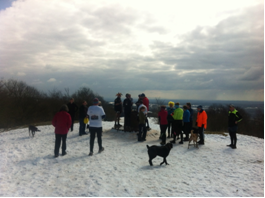 Down downs: awarded by Tweeny (does this man do everything?) to the hares: Tweeny, Penelope Pitstop (once retrieved from her car), Pot Belly and whoever the other one was and an accompanying hare’s song to go with it.  Next, to anyone for singing a song (the ruder the better, apparently), the Belgian visitor entertained us with her little ditty; we were treated to the hashing Lord’s Prayer; the noisiest dog in the world and then to anyone who wants one really.
Great fun, great run, great people, great food!  (Just mind the children during down downs!)
Hot Lips x

p.s. in the spirit of BH3’s repertoire of hash songs, I’ve made up my own little ditty to mark this occasion (to the tune of jingle bells)