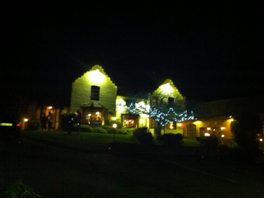 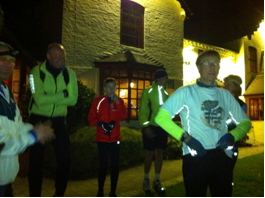 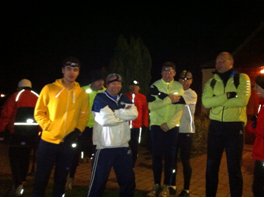 Trail:
He’s so excited, and he just can’t hide it, we’re all about to lose control and we just can’t hide it!
Everyone had to wait for the latecomers who had childcare issues but there’s nothing like a bit of suspense to start the night off is there?
Our excited hare was treated to a cheerleading spectacular from DF, Bristols, Cyclopath, Well Laid, Say No More and Hard On, although DF got so excited she almost forgot what she was spelling.  A fanfare of party blowers ensued before we were told of tonight’s treat: 5 muddy miles, 4 and you’re on, 3 HHs (plus some extra ones added in for good measure), 2 menu choices and 1 very excited hare!  What could possibly go wrong?
Wrong ducked out before the first HH (ee dae feel very well), we were accosted by an inquiring resident at the 1st HH (thanks Lassie for sorting her out), then we were almost fumigated and lucky to escape alive as we ran past a bonfire (I was hoping this was going to be the most original HH ever encountered but my hopes of toasted marshmallows were dashed once I’d got my breath again). 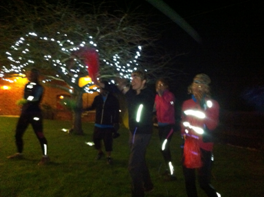 Things did get better for a while with some cheeky falsies and some easier terrain and another exciting HH with party poppers, blowers, cheers and sweets.  Then there was lots more mud, hills and stiles etc (including the poshest stile anyone’s ever seen) but all was forgiven when we were bowled over by the Panache - this has become the best hash refreshment to date!
Some harsh winds on top of the hills, some misguidance from Early Riser and then a sharp downhill that caused Lassie to lose his footing.  The excitement was starting to falter again on the final furlong as all we wanted to do was get back to the pub.  We finally got there after an age, where the excitement was re-ignited. 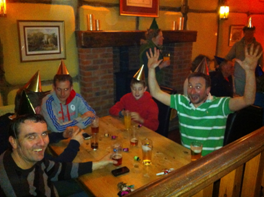 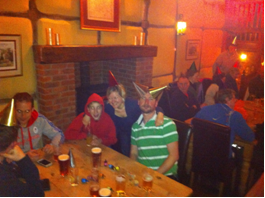 Down downs: awarded by DF to Leg Over for his very exciting solo hash (he tried very hard not to let anyone else in on his game), his trump card of Panache (excellent move) and his ability to bring in a new weather front (it must have been all the excitement); Seb – almost a virgin; Lassie for falling; Russell Sprout for his gremlin noises; Richard for taking a leak; and finally to the welcome returns of Compost and Hard On the master blaster (a possible renaming?) – welcome back boys, nice to see you on your feet again! 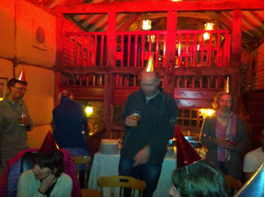 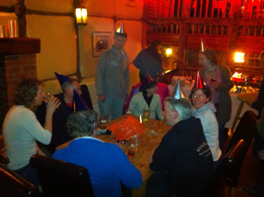 Hot Lips x
Next week: The Loom & Shuttle, Kidderminster
Posted by Lassie at 09:26