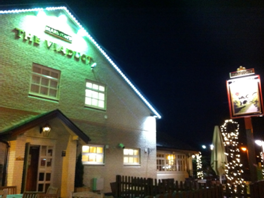 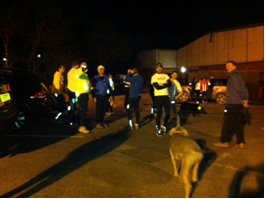 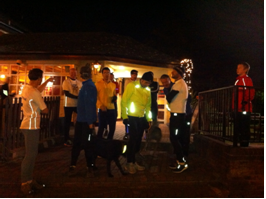 Trail: Am we on? We are ay we? A short ‘un tonighat as we gorra get back fa food.  Laid in shavings (not Smudger’s), if ya con fiyand it ya’m on!
Not a lot on the ground for a while but then, guttell, a whole load of sawdust dumped.  Most didn’t realise that Slim Boy Fat was in on the game causing the Amateur to be fooled as he ran back past him.  A quick HH in a field somewhere near Stone, where Crossdresser was being quizzed over his running gear, and then we were off again so that we made it back in time for tae.
A trip around the houses to Trinidad’s Piaco International Airport for some more refreshments: beers, orange juice “and dun anyone want a cuppa tae?”  We seemed to be doing well until Slim Boy Fat led us up a wrong ‘un but not for long, we were back on track and heading towards the final HH where Penelope Pitstop seemed very pleased to be talking about hard ones.  Back up and over the railway line, around past the Harriers and a lovely long downhill to the largest on inn in history!
Getting his “fix” 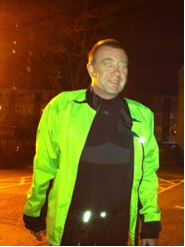 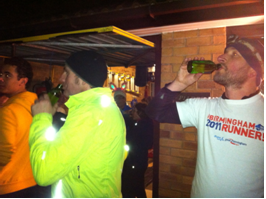 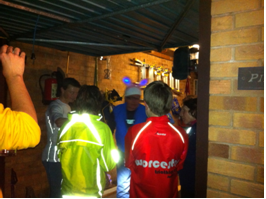 Down downs: awarded by Doggy Fashion to Pootle & Slim Boy Fat for their fantastic hash with more sawdust than a sawmill and the biggest ever on inn (you see, size does matter); a welcome return to Trenchfoot, out to impress us in his Bolshoi tights; Crossdresser and the Amateur for their shortcutting (certainly not emerging from the undergrowth); Legover for his topless prowess in the car park and being the most excited inaugural hasher ever.  Finally, it must be noted that our RA ran all the way tonight; well done DF!
Hot lips x

Next week: The Admiral Rodney, Berrow Green, Martley
Posted by Lassie at 14:58