The Honey Bee, Doverdale or the Stingers, Brambles and Wasps Hash 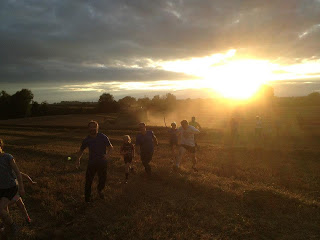 
Food: off the menu
Hare: Legover
Visitors: none
Virgins: none

Trail: This has been hailed as Legover’s brutal assault course. It was yet another lovely summer’s evening but we had been warned - no shorts! Of course, this resulted in Game Bird and Lassie ridiculing those of us that had actually listened. In any case, wasps don’t worry what you’re wearing do they?

And so, 20 hashers, 6 hashlings and one Demon Dog set out down the lane. It was a welcome return for Cleopatra and Early Riser, although Early Riser was found to be very complaining towards the end of the hash and will more than likely endeavour to be a late or non-riser in future. Game Bird found herself a big stick and set off with the girly hashlings like the pied piper, all of them gaily prancing around. 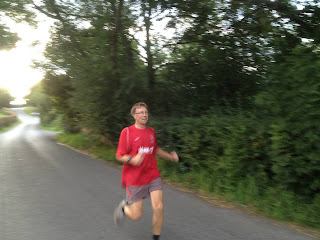 Back to Legover’s assault course; I don’t know what we’ve done to deserve such punishment? Very early on, the rule of “3 and you’re on” was flouted by the 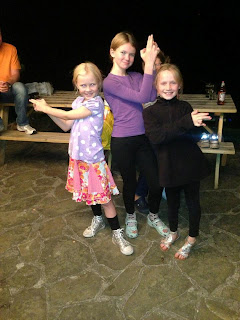 hare as we got a check back down nettle alley. Cross Dresser and Cyclopath stood at the top of the hill watching the hashlings emerge from the painful undergrowth.

Some more confused markings at the next field caused some more groaning at both the nettle stings and the trail itself. Copulation and the Amateur took the lead, Game Bird stayed with the hashlings, Doggy Fashion and myself gave up and sauntered along for a while, lusting over young rock stars, whilst Legover carelessly grinned to himself at the back.

Clodhopper was the first to disturb the wasps, Unlaced squealed and did a little dance before darting off out of sight. I got stung behind my knee before realising what was going on and swiftly followed Unlaced. Doggy Fashion got stung on her lip and Shag got stung on his back. Doggy Fashion had never been seen to move so fast and was still hollering “run for your lives!” half a mile away. More were stung but we were miles away by then.

There were only 2 HHs, no drinks (because he couldn’t be bothered to carry them) but a fine selection of sweets. Some were so traumatised by the hash stinglings that extra halts were taken. Some had even provided their own refreshments! Legover kindly shared his child-friendly insect bite cream with almost everyone at the final HH, whilst Dr Whiplash and the Pro shared out the blackberries they’d picked.

Dananananananananananananananana Batman was chuckling to himself after hearing Bushwhacker’s comment of “my dad’s awesome, he’s got a gun and shoots people!” Sprout tried to curb Bushwhacker’s language, aware that there were many younger hashlings around. The hashling girls had somehow conned Shag into giving them all piggy backs, whilst Copulation produced a whip, just right for the occasion!

The sun was setting beautifully over the lake; the fisherman’s tranquil evening being rudely broken by our presence. The combine harvester was another hash surprise but at least it was easier to leap across the corn furrows than the sinking soil furrows! A shady woodland before yet another dash down nettle alley – just in case anyone had failed to get stung already.

Down downs: Legover was spanked rather than thanked for his brutal hash, Doggy Fashion whipping him for each of his misdemeanours – the check backs, the combine harvester, for hiding the flour under leaves, the lack of drinks, the brambles, the nettles and the wasps nest… he was given extra spankings for the brambles, nettles and wasps nests. Lost Skywalker for his shivalrous behaviour in beating back the brambles and nettles with a large light sabre; Game Bird for also using branches as machetes; Copulation for his conspicuous whip “finding” ; Andy for just being Andy; and finally to Shag for being the birthday boy.

Happy birthday was sung to Shag, the Pro and myself before launching into Shag’s birthday games: Golden Graeme and Who’s this? Judging from the hash flashes, there were more birthday shenanigans involving hashling pyramids and flour showers – I notice Legover remained un-floured…

Stingers, Brambles and Wasps Hash by Garmin Connect - Details
Posted by Lassie at 10:15